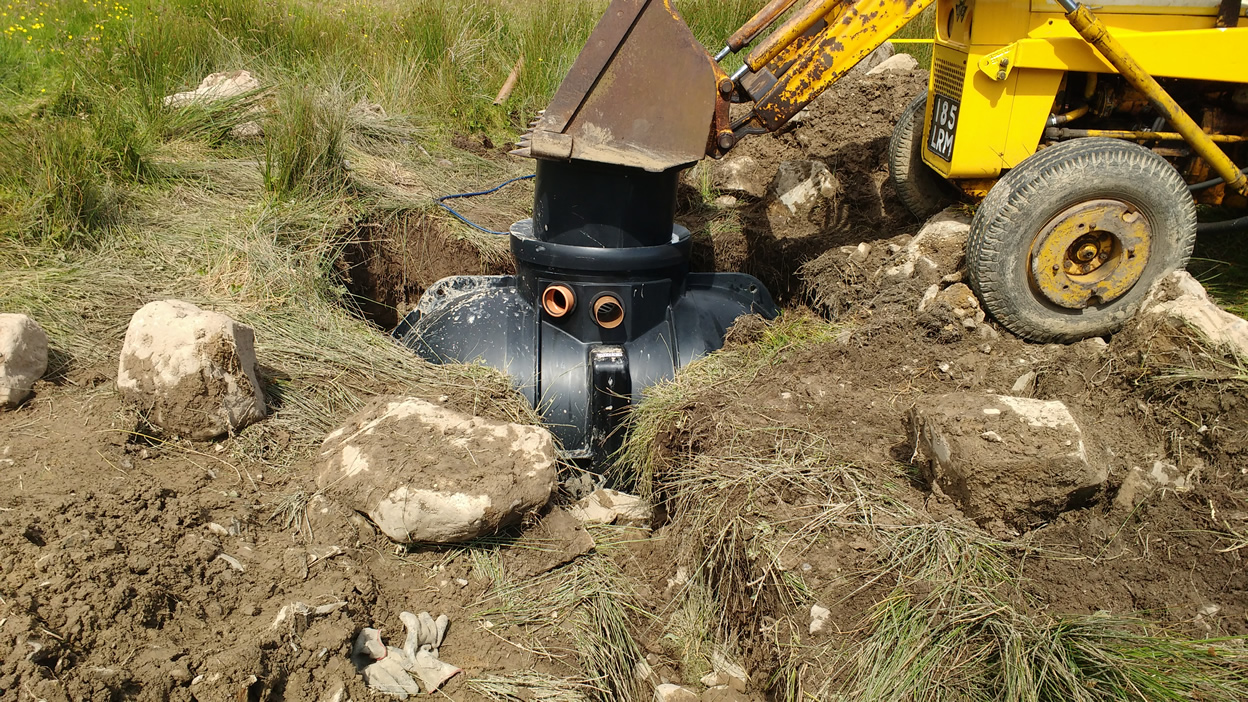 I believe the word “Auchenstroan” comes from the Gaelic word “achadh” (field of) and the Scots verb “strone” (to make water).  So, together they kind of mean “field of springs”.  And indeed we have many little springs running through our fields.  However, they are small and temporary in nature and so cannot provide a reliable source of water for our livestock.

So, I devised a cunning plan.  Place a large underwater tank in one of the top fields, in a spring, divert some of the water into the tank and then connect all the water troughs.  Gravity should do the rest.

All seemed pretty simple, so I order the tank, pipes and connectors.

Now, I’m not so stupid as to try and dig a large hole with a spade.  One of our neighbours offered to help with his digger.  So I booked him in and the work started earlier this week.  I thought it would be fairly straightforward – dig a hole and a trench for the outflow pipe, pop it all in and fill up the holes.

Well, that’s not quite how it turned out.  Our land is riddled with rocks.  And I don’t mean garden centre rockery sized rocks.  I mean boulders!  So digging the hole took two days and we only just achieved the depth we needed before hitting an immovable rock the size of a small planet.  The trench was slightly easier, but only just – we had to hack out channels around two or three further monster rocks.

But finally we had our hole.  Only, then, of course it being a spring, it started to fill with water.  So when the tank went in, it just bobbed about.  So, we had to pin it down with the digger.

Which sort of worked, only, as the digger settled, it started to warp the tank’s tower.  But we couldn’t fill the tank with water as the base wasn’t stable.  So I started lobbing in small rocks and earth and over a period of hours, got enough in to create a stable base.  Then we tried to add water but it was too high and the water pressure in the house wasn’t up to it.  So Richard contacted a local farmer and we borrowed a 1,000 litre tank.  We filled that twice, dragged it up the hill (with a tractor and trailer) and transferred the water (that took a while).

Only then did we feel it was safe to fill in the outgoing trench.

Next day, I filled in around the tank by hand – that was a little tiring (and muddy).  Once I had enough earth and stones in, I was able to roll some rocks on top.  The legend of Sisyphus played through my mind as I struggled to do this, only, fortunately, my rocks stayed where I put them.

But, it all worked.  Then Richard returned and with his digger to help, we buried the rest of the outflow pipe (to keep it safe from hooves) and also moved a couple even bigger rocks onto the top of the tank.  I think it is now safely pinned down.

But best of all, water started weeping out into the trench I had dug and started flowing into the tank.  It works!

Now all I have to do is complete the pipework bringing the water to the troughs.  Should be straightforward…..