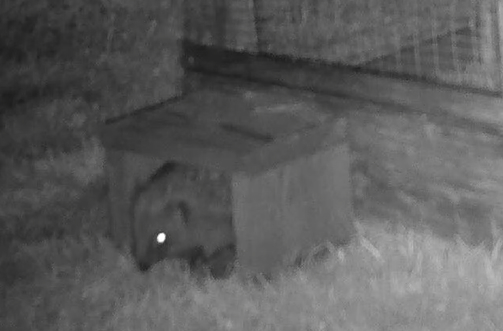 Last November, I found a tiny hedgehog wandering around the garden.  It was too small (less than 300g) to survive the winter, so we took it in (see hedgehog seeks board and lodging).  With a custom built run, house and a personal heater, Hoggy grew stronger over the winter months.

We released her at the end of March (see Hoggy Released).

We set up a wildlife camera to capture what she did and placed a feeding station near the hedghog house we released her into.  In the first week, only videos involving a mouse, a deer, a cat and a robin were captured.

I looked in the hedgehog house and Hoggy had gone.  It’s what one would expect from a hedgehog, but for some reason the wildlife camera didn’t capture her leaving.  Most annoying.

We are pretty sure it’s Hoggy because she ate the dog food and dried calcium worms but left the specialist hedgehog food.  This is what she had done in her winter quarters.

We shall keep replenishing the feeder to ensure she, and any other hedgehogs, have access to a tasty snack if they need it.