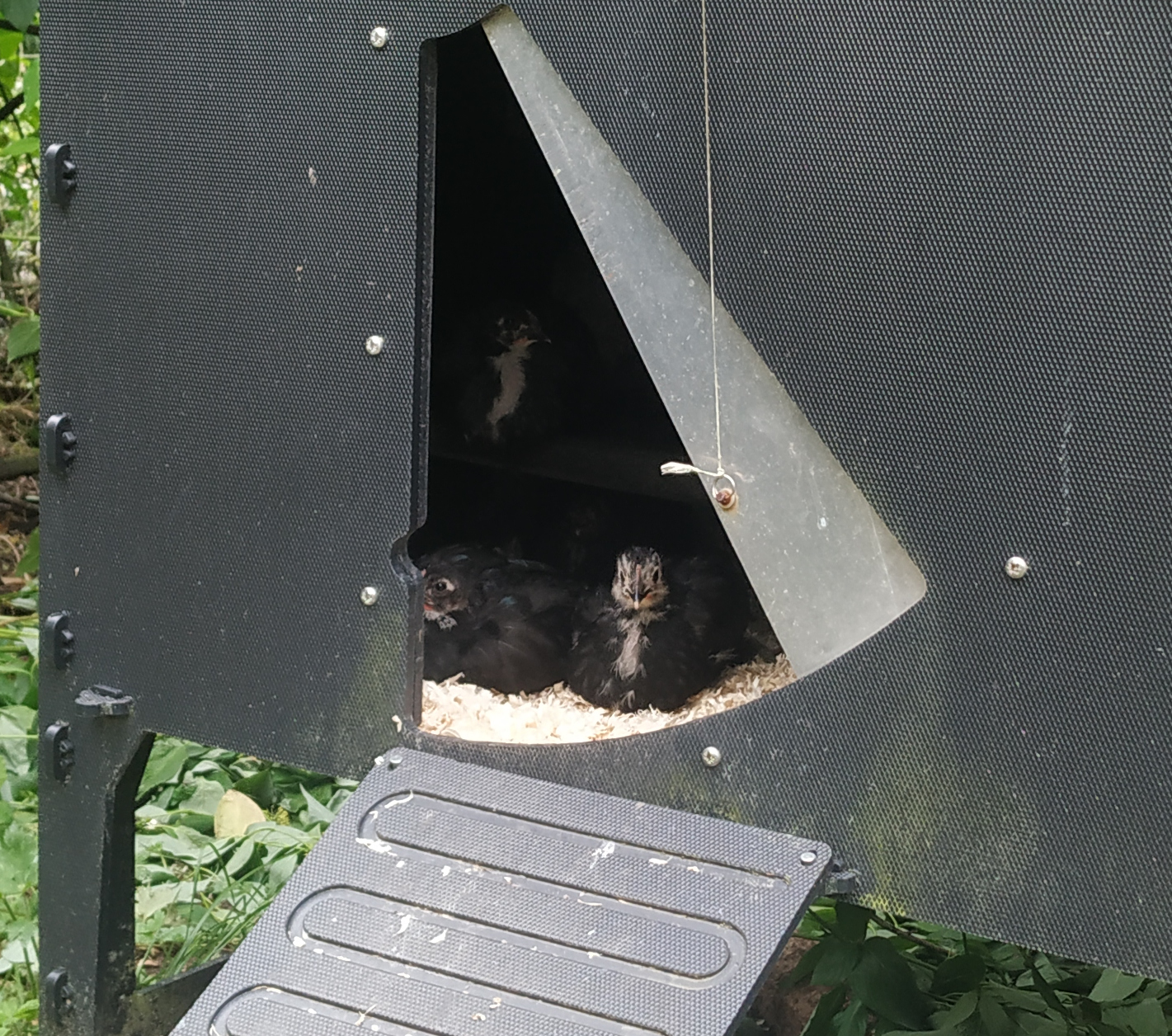 Our chicks have had a purpose built predator proof run from when they were eggs. After they hatched, they had a couple of days to find their feet before being let out into the wider world. Each night, they returned in the early evening, had a quick meal of corn, and turned in for the night. Every morning, they were waiting by the door, eager to get out and about.

At around four weeks old, their mother, Mrs Mills Junior (MMJ), decided it was time to return to the main chicken coop. This could have gone smoothly… …but it didn’t

First, MMJ decided it would be a good idea to roost in the bushes behind the coop. A few of the hens like to do this from time to time. However, reaching said perch was an impossible ask for the chicks. They might be getting quite big, but they are not yet close to being able to fly.

MMJ set up herself up, got comfortable, closed her eyes and settled in for the night. We watched, wondering how best to intervene. Then, MMJ realised something was missing and, after an elongated period of calling, flew down to find her chicks. Much clucking and shaking of feathers ensued before, finally, she decided to head into the coop. The chicks were not sure about this and took their time, but eventually, they all followed her in. Quickly, we shut the door.

The following evening, it was raining. This time, MMJ decided the coop was the better option. However, two of the chicks had forgotten the way and sat disconsolately under the coop. This caused much scratching of heads. Eventually, I approached and threw a little corn down. They were straight over and were joined by Pepper. Pepper returned to the coop and this was enough to show the chicks the way. Phew!

Next day, I made some adjustments to make the ladder easier for the chicks to use, basically, I made it a little less steep. However, MMJ decided to go for the tree roost option once again causing panic in her brood. This time, she seemed oblivious. We intervened, shaking the bush causing her to fly down. Cue mass clucking and shaking of feathers. She led her chicks around for about half an hour before finally settling into the coop. Once all five chicks were in, we shut the door.

We thought things were settling by now, however, we hadn’t made allowances for Clippy. Clippy is the flock matriarch and the most feral. She likes her wild camping. That would be fine, but she also feels the need to announce it to the world. Next evening, MMJ and the chicks were happily ensconced in the coop when Clippy flew onto the roof on her way to the bush. She clucked her intentions out loud and the chicks all rushed out to see. Cue mass disruption as other hens joined in.

This whole stramash was made more complicated by MMJ deciding the coop was for her, her chicks and the cockerel only. No other hens allowed. Fortunately, we have two coops. Nevertheless, the four hens cast out were none too impressed. They checked out the other coop, but seemed unsure. In out. In out. When, finally, all were in, we pounced and closed the door.

Yesterday, things finally went smoothly. The chicks and MMJ joined the cockerel in the Green Frog coop. The other four headed straight into the Solway coop and roosted.

Who knows what fun and games tonight will bring?