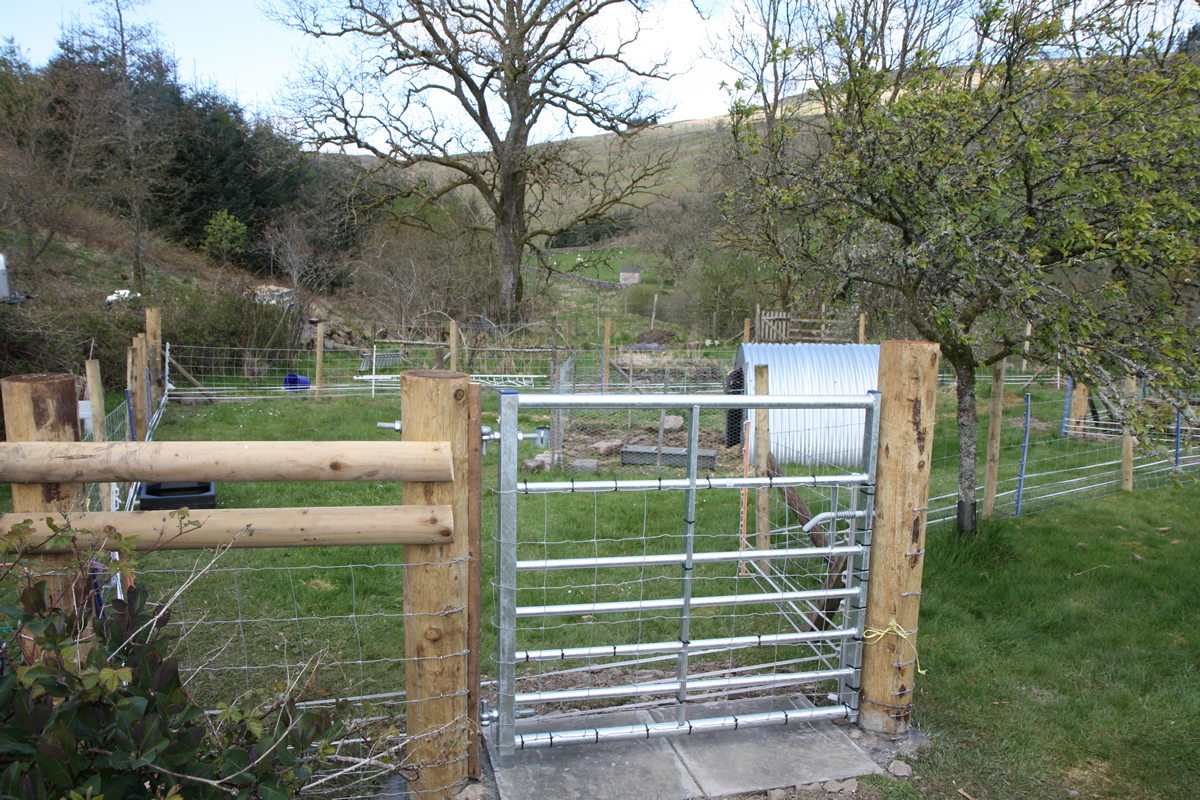 I am pretty sure I mentioned earlier that one of the first things our new piglets did was go straight through the electric fence and make a break for it.

So, we did some research on how to contain pigs.  And the prevailing wisdom was that electric fences, in themselves are not enough.  Even for pigs that have been trained to respect them.

So, new pig pen it was then.  And the clock was ticking.  Our two little weaners were still pretty small, but they were growing and they don’t half grow quickly.  So, despite the fact that we were bang slap in the middle of lambing (3 hourly checks, interrupted sleep, tired, the whole tiredness thing), we order a steel gate, posts and stock fencing.  Prevailing wisdom also recommended two strands of barbed around the base to stop them trying to get their noses under it and lifting it up.  And of course, the gate hinges need to be reversed.

And on Good Friday, or thereabouts, construction began.  Of course, the tractor and the post knocker hadn’t arrived, so it all had to be done by hand.  I got cracking.  The first post gave me a false sense of security.  I dug a 3 foot hole (for a large corner post) pretty quickly and concreted it in.  The next one I hit rocks about 18 inches down.  Same on the next one.  And the next.  Hmm, off to the DIY shop for new tools, a post hole digging long chisel and a special post spade were procured.  But it was hard, hard work getting through the stones.  Eventually, 5 of the 7 corner posts were in.  The gate hadn’t arrived so I left the gate posts for now.

Time to knock the standard posts in with the post driver.  Same problem, rocks at 18 inches.  There’s a particular noise a post makes when it hits a rock and you just know that’s as far as it’s going.  I heard that a lot.

But, one post at a time, I made progress.   Until post number 9 which was roughly half way.  I was tired now and should have stopped.  But “one more post” I thought to myself.  I set it up, raised the driver, brought it down, caught the edge of the post and toppled the post driver (very heavy) onto my head.  “Ouch” I said (or words to that effect)!  Nicole came running and got me an ice pack (frozen chips) which I placed on my head.  I didn’t have concussion (we checked), but the danger was compression.  So after talking to NHS online for a bit, I was dragged to A&E in Dumfries.  They were great, they patched my head up with superglue and sent me on my way.  This was Easter Monday!

Anyway, I took a day off and resumed construction on the Wednesday.  I got the rest of the posts in (more carefully), the gate arrived and it and it’s posts went in.  I put in the stock fence and two strands of barbed wire.  Nicole suggested we put the electric fence around the perimeter too, a good idea, so in it went.

And we were ready for the grand opening ceremony.  And not a moment too soon!, our weaners were growing and already looked too big for their small run.

We created an opening in the small run.  They emerged straight away, grunting happily.  Then they started tearing round the arc at quite some speed.  They loved the extra space.  It was great to watch.  A job well done.