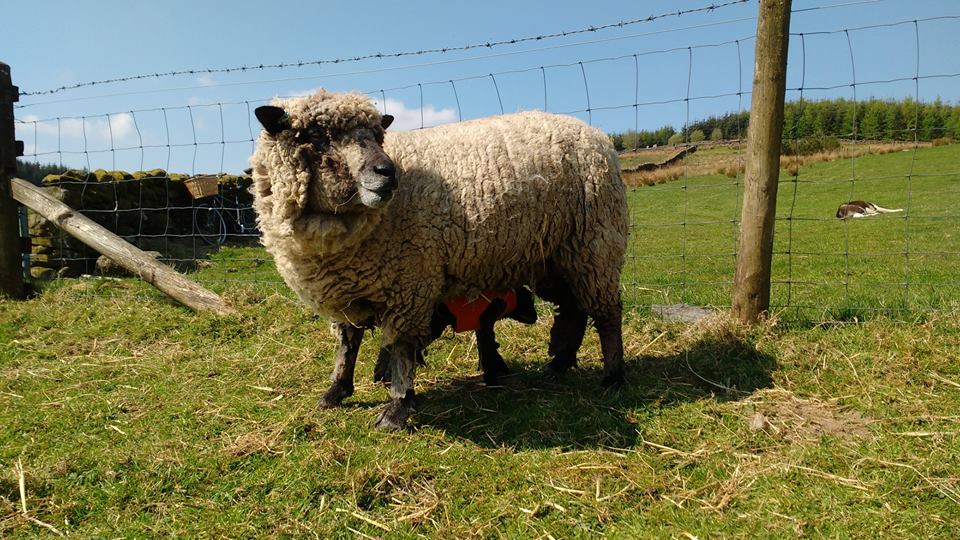 Lambing is over for another year.  We have three lovely lambs gamboling happily around.  But, as ever, lambing was full of ups and downs.

As you may have read from another post, we had purchased 3 ewes in lamb.  We couldn’t breed our own sheep as we were moving and it would have been a logistical nightmare.  We thought 3 ewes, should be less work than last year when we had 10 ewes in lamb.

Well, that’s not quite how it turned out!

The lambs were due around 21 April, but about a week before, Ursi (with triplets) went into labour.  However, not only was she early, the lambs were not coming.  We called in the vet.  He delivered 3 lambs, all tiny and all unable to stand.  Premature lambs are not fully developed and so are difficult to keep alive.  We clicked into gear – we monitored them for the next 48 hours administering colostrum, milk, heat, anything we thought they needed.  We didn’t sleep for two days.  Unfortunately, only one survived.  The youngest slept all night in our living room in front of the fire but sadly, he never even managed to stand up and only opened his eyes once.

Lambing can be quite hard.  On the good side, Pinkie pulled through.  She adopted the name Pinkie because of the little jumper she wore to keep her warm.  She was born slap bang in the middle of a really cold spell.

Then, about a week later, bang on time, our second ewe started showing signs of imminent lambing.  However, again, something was wrong.  There was no breaking of waters, the labour was not progressing as it should.  So, out came the vet (again).  Sadly, this lamb had died in the womb and so the vet had to perform a C-section in order to save the ewe.  Thankfully, she (Vi) has survived and integrated into the rest of our flock.  It was sad for her because she had shown real interest in Pinkie.  She seemed quite maternal.

Anyway, one to go.  Well, we had a bit of a quandry.  By now, Pinkie had been turned out with her mother.  Vi was in with the other ewes.  So, where should we put the remaining pregnant ewe (Vera)?  The lambing shed or the field?  The lambing shed was better for us (closer so easier to keep an eye on her and warmer – it was freezing outside).

However, Vera had other ideas and after some quite insistent conversations with her pal Vi (in a nearby field), she hopped over the hurdles and wandered off.  Having escaped, she wasn’t quite sure what to do next.  So, we led her into the field alongside Ursi and Pinkie.

For us, this meant a half mile walk every 2 or three hours to check on her.  I did the night shift up till 2am and Nicole took over at 5am.  And the cold weather persisted, and persisted and Vera waited and waited.  And we got more and more tired!  And we didn’t have an actual due date for Vera, the ram had not been raddled.  We just had the start date and the 18 day window.

Out of desperation, we pondered what else we could do.  Was there some sign that could let us know one or two days before the lambs were due?  Then Nicole remembered something she’d read; something about the ewes changing shape.  A quick bit of research and she had it.  Ewes do change shape up to 3 days before lambing.  This is because the lambs change position to get ready to come out.

This was really helpful, we reduced the inspections to 4 or 5 hours but remained ready to increase the frequency once we spotted Vera changing shape.

Nicole noticed this shape change happening on the May bank holiday weekend.  At first, it was subtle, but by Monday morning, Vera was much thinner on the sides and much fatter underneath.   And, yippee, the weather had improved – it was sunny.  Not much happened in the morning so Nicole headed off to work in the afternoon and I settled down in the field with a book.  I kept an eye on Vera.  Shortly, Vera started returning to the shelter and pawing at the straw.  This could be a sign that lambing was imminent.

Then around 4pm, I inspected her more closely.  There was a tiny trickle of water, just droplets really, coming from her.  Not your usual waters breaking, but it could be.  I called Nicole and she rushed back.  About 5 I went back to the house to make us some tea and when I got back, Vera was starting to deliver her first lamb.  We put her on her side, I kept here there (gently) while she pushed out Iona with Nicole’s help.  I know that this year, they are supposed to be named with a name starting with an ‘X’, but really, ‘X’?  Anyway, as a first time mum, Vera was brilliant and set about licking Iona dry.

Iona was standing within 10 minutes and attempting to suckle.  We watched as Iona attempted to suckle, Vera carried on licking and lamb number 2 (Ethel) slowly edged into view.  In fact, Ethel came out all on her own with no help.  Now Vera had two lambs to lick, she wasn’t quite sure which to lick first.  We helped dry them off, then took them into the shelter (warm and full of straw).  Nicole started teaching the lambs how to latch and to our relief, they were good at it.  These two were going to be OK.

Now, three weeks later, all the lambs are healthy and full of fun.  They enjoy nibbling at our clothes and even enjoy the odd cuddle.

Pinkie did need much ongoing care but we have nursed her carefully and now she is big and strong.

We are going to keep all three.