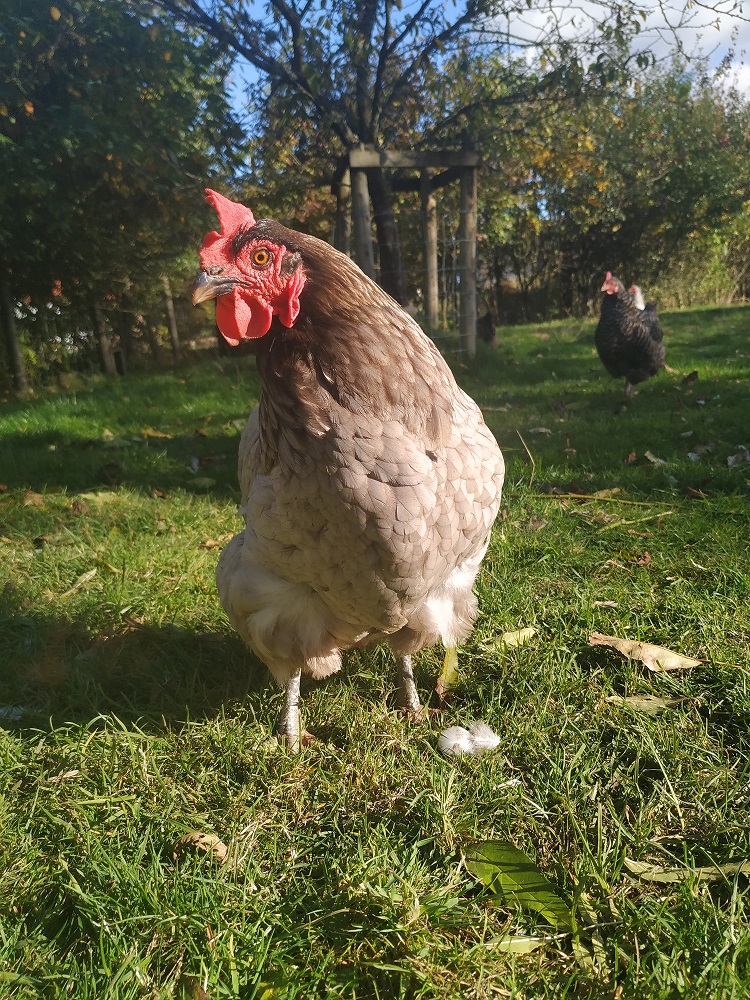 Two weeks ago our dear brave hennie Bim, passed away to the Great Hen Run in the Sky.

Bim was a remarkable hen, she lived a whole year and a half longer than predicted since developing a serious condition called “egg yolk peritonitis”.

Basically this meant that every time Bim laid an egg, the yolk would miss popping into the egg shell and instead, slip into her coelomic cavity where it festered and became infected.

Since being diagnosed back in the summer of 2019, Bim somehow managed to shrug off the infection (with a bit of help from us but mostly by her own remarkableness) and carried on with her every day business of scratching around, bobbing about and laying eggs, well, internal ones anyway.

When Bim was first diagnosed, we gave her antibiotics, then garlic and other potions to keep her going in between the antiobiotic injections, click here to see more: and here, and here

Winter came and her swelling subsided in line with the hens not laying over the winter months.

With the arrival of spring though, Bim started to swell up again and our hearts’ sank.

We thought long and hard and had several cups of tea over which we made the decision to leave off the injections.  She’s an elderly hen and we felt the invasive treatment would cause her more stress than the condition itself.  Being an older girl, her breast was on the skinny side and it was actually really tricky to find some muscle to stick the needle in.  So we continued to monitor her through the peak egg laying months, spring and summer, and continuted to give her garlic and cider vinegar.

One day earlier in the year, April or thereabouts, Bim decided she’d had enough of garlic and refused to eat any more.  I can’t say I blame her, she was developing very garlicky breath and Cherokee the cockerel and the other hens had been complaining.

Garlic-free, Bim seemed happy enough despite the swelling which caused her to waddle like a penguin.  We continued to monitor her and the swelling came and went but never completely disappeared.

Sometimes I think perhaps the reason Bim kept going for so long was because she had an important job to do, she was “Top Hen”!  This meant that she was first to the corn in the morning, and, well, first to everything really.  Her status meant that the other hens looked up to her and gave her lots of respect, including Cherokee the cockerel.

If any of the hens stepped out of line, Bim would give them a sharp telling off in the form of a peck.  The hens and Cherokee all understood this and were happy to follow Bim’s lead.

Right up to her last day, Bim commanded respect amongst the flock, however, we suspected we knew who was “second in command” and who would take over when eventually Bim breathed her last breath.

And that was Tina Sparkle.

Tina Sparkle is a confident hen of a certain age.  We inherited her when we moved to Auchenstroan so we’re not actually sure how old she is, she could be 5 or 6 or older.  Tina Sparkle is a small hen, particularly compared to Bim who was a big girl, but she doesn’t let her size get in the way of her natural leadership skills.  She has slipped into Bim’s shoes very happily, and the other hens (not forgetting Cherokee) are all more than happy to follow her lead.

We wish Tina Sparkle every success in her new role and have no doubts that she is the right lady for the job.  Congratulations Tina Sparkle!