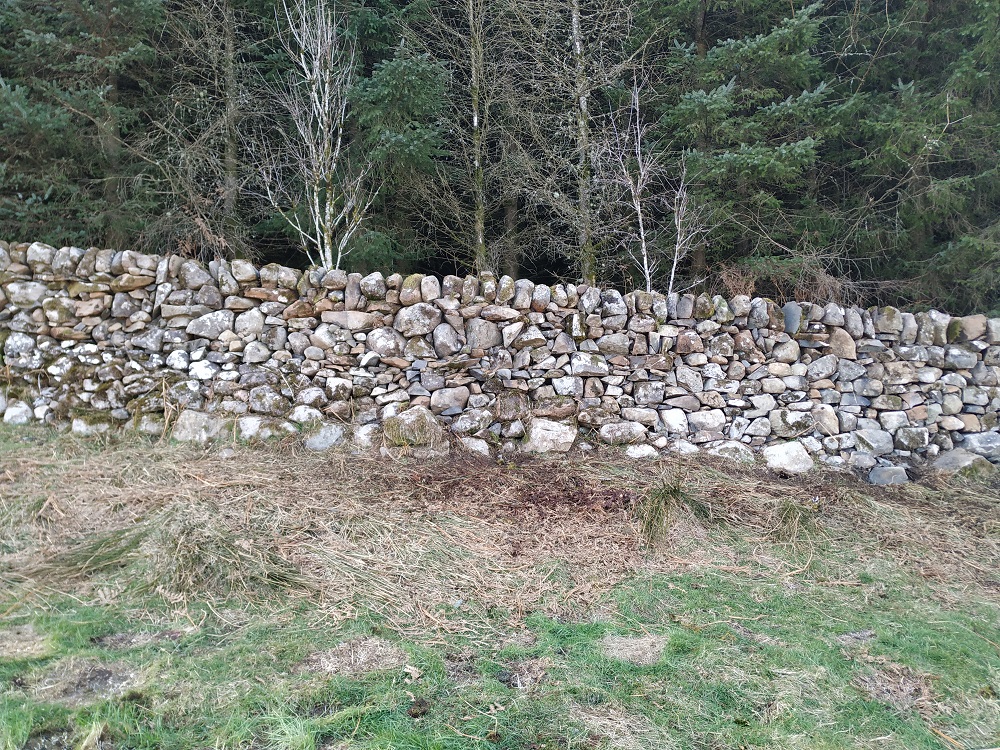 Earlier this year, I wrote about a drystane dyke that had a small gap of fallen stones but was to be a major repair (Major Stone Dyke Repairs After Walker Damage). It has taken a while, but repairs are finally complete. All in all, I had to take down 17 metres of dyke to find two relatively stable upright sections at either end. Indeed, such is the poor state of the wall, I could easily have taken a further 10-15m down. But there’s only one of me and I try not to bite off more than I can chew.

The problem is that the wall is old and there has been settlement along its length. The settlement is uneven and this causes the wall to lean, much like the Leaning Tower of Pisa. However, a drystane dyke leans in both directions and ends up looking like a drunken snake. The top stones, originally held in place by gravity, end up held in place by friction with gravity trying to pull them down. The merest touch can send them tumbling with a cascade effect. Indeed, you have to be careful of mini rock ‘avalanches’ when taking it down.

I also had the joy of manipulating some rather large stones, ones that I knew if I put on the ground I’d never get back up again. So I had to repair the bottom half in stages, shuffling these monsters along. Once I had the bottom half complete, I spaced them out and they looked like giant’s teeth.

Bit by bit, I rebuilt it until, this week, encouraged by milder weather and the appearance of what was beginning to feel like spring sunshine, I got to the point where I had just the top to do. This can take a while as you can spend a lot of time pondering which stone to use next (not to mention trying to find the tape measure you had in your hand moments ago) – the goal is a straight line at the top, not easy with stones of various shapes and sizes.

As ever, with just a few meters to go, I had to keep going and yesterday, around tea time, I was able to step back and sigh gratefully. My back complained but the pain was trumped by the joy of finally seeing the drystane dyke restored. And, I have to say, I am mucho pleased with how it looks.

The next repair is already beckoning (these dykes have been somewhat neglected), but I have a few other jobs to get on with, not least writing my second novel and getting this year’s veggies planted.