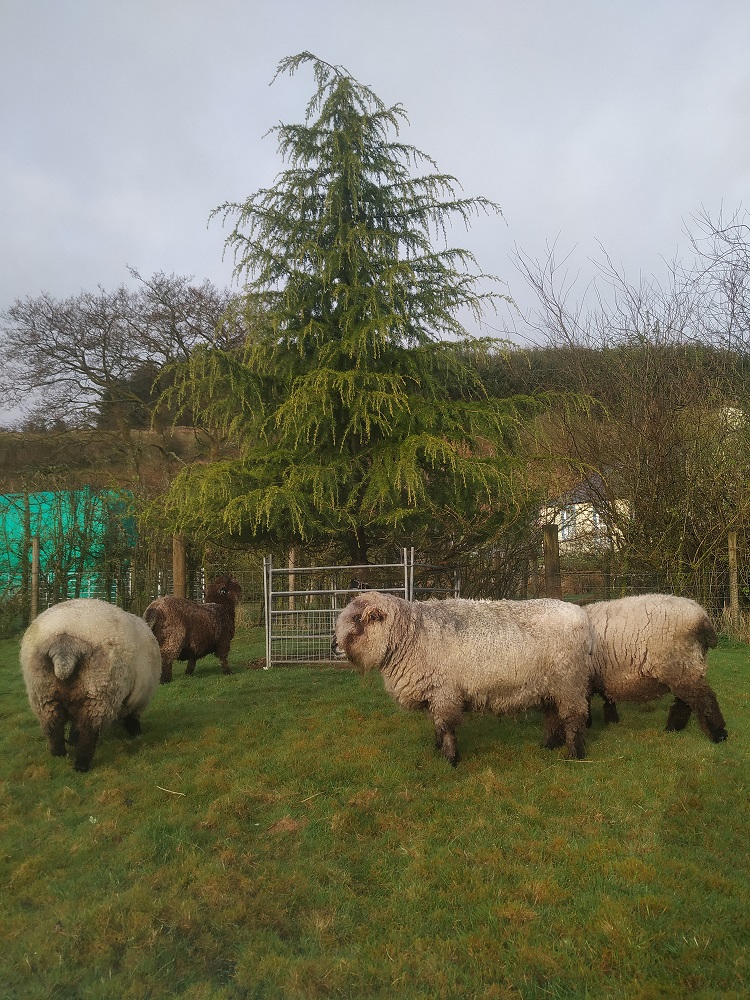 On our smallholding our main focus is making sure our animals have a long and happy life, but we also love plants and if there’s a plant in trouble, we’ll make sure we do our best to save it.  This story is about our efforts to rescue a beautiful Himalayan Cedar tree.

During the winter our sheep spend a lot of time in the orchard where they have access to the shed and hay feeders.  They can still trot off to the wider pastures if they choose, but they tend to hang around the orchard for much of the time, especially when the weather’s blowing a gale.

Last year we extended the orchard to include more meadow and give them extra space to mooch about in.  During the winter the ground can get really muddy, especially around the hay feeders so we thought the additional space would be much appreciated by the little dears.  And it was!!  They love the new bit, it includes a hill which they trundle up and down, and also several trees which they like to stand under whilst watching the world go by.

We also love the new bit, it’s great to know we can give the sheep variety, particularly access to trees.  Trees give perfect protection against the elements; in the winter they provide wind breaks and in the summer they provide cool places to sit under and chew the cud.

In the orchard we have apple and pear trees which are all neatly protected with tree guards.  Sheep love trees but they also love eating them!!

In the new bit, there’s a Himalayan Cedar tree which somehow we forgot to protect.  But the sheep didn’t seem that interested in it and so we thought no more about it.

Summer turned into autumn and then winter and the little ones were spending more and more time in the orchard again.  Early one December morning we were topping up the hay feeders and discovered a suspicious looking, four legged woolly crowd loitering around the Cedar tree.  As we drew nearer we heard scraping and nibbling noises.  On closer inspection we discovered a wide, neatly nibbled orange band all around the tree trunk, at exactly sheep head height.

Oh no!!! Our tree had been completely ring barked!

After feeling awful about the fact we forgot to protect our poor tree we quickly got to work.  First we put some sheep hurdles around it to prevent further damage, then we googled “what to do”.  Now I’m a horticulturalist, RHS trained thank you very much and I do people’s gardens but the truth was, I felt really daft because at that moment, I didn’t have a clue what to do.  I had an inkling there was a grafting technique out there for ring barked trees, but I couldn’t remember what the technique was called, let along how to do it.

After multiple searches on google and several cups of tea later I found the info.  There was a technique called a “bridge graft”.  This entails taking lengths of one year old growth (scions) from the upper canopy and attaching them across the damaged area, like little bridges, so that the sap can continue to flow from the bottom of the tree to the top.

We also had to protect the nibbled bit (which was actually quite a large area!)  The RHS website recommended applying damp moss all over the injury and holding it in place with tape.  So first we did this, (luckily we have moss aplenty here!)  Moss is naturally anti-bacterial so makes the perfect dressing for a wounded tree.  We got to work applying the mossy bandage until the whole wound was protected.

Next, Adrian whizzed off to the shed to rummage around for some small non galvanized nails.  We would need these to attach the scions to the trunk.

Then, tools at the ready, we got to work.  We had to work quickly because it was due to rain later and you can’t get grafts wet or they rot.

It was heart breaking standing on the ladders and snipping lengths of growth from the already damaged tree, I felt like a traitor.  But it was the only way we’d be able to save our poor tree so I carried on snipping.

Once I had six healthy scions I took my knife and made little “pockets” into the tree trunk so that I could pop the scions in.  Easier said than done!  The sheep had nibbled the trunk so far down that the only bark I had access to was rough and not at all pliable.  But I persevered, and eventually, lots of grafting wax and nails later we managed to create a circle of grafts all around the trunk.

Then we waited until spring … until now in fact, to see if the tree would make it.

We are pleased to report that so far so good!  There are fresh shoots and there doesn’t appear to be any signs of die back.

All the grafts except one, survived the winter storms and they appear to be doing their job, transporting nutrients from the bottom of the tree to the top.

We have started a two weekly regime of feeding with juice from our wormery.  Plants love wormery juice, it gives them a real boost, even though it’s a bit whiffy.

We’ll leave the mossy bandage on through the summer and remove it in the autumn.  It’ll be tricky to remove because of all the little bridges which sit over it, but I’m sure we’ll manage.

Meanwhile, we’re not counting our eggs, but so far so good.  And the sheep, well, they spent a few days trying to get to their new favourite snack but the hurdles proved to be a good defence so they gave up.  Now that it’s spring they prefer grass to trees anyway.