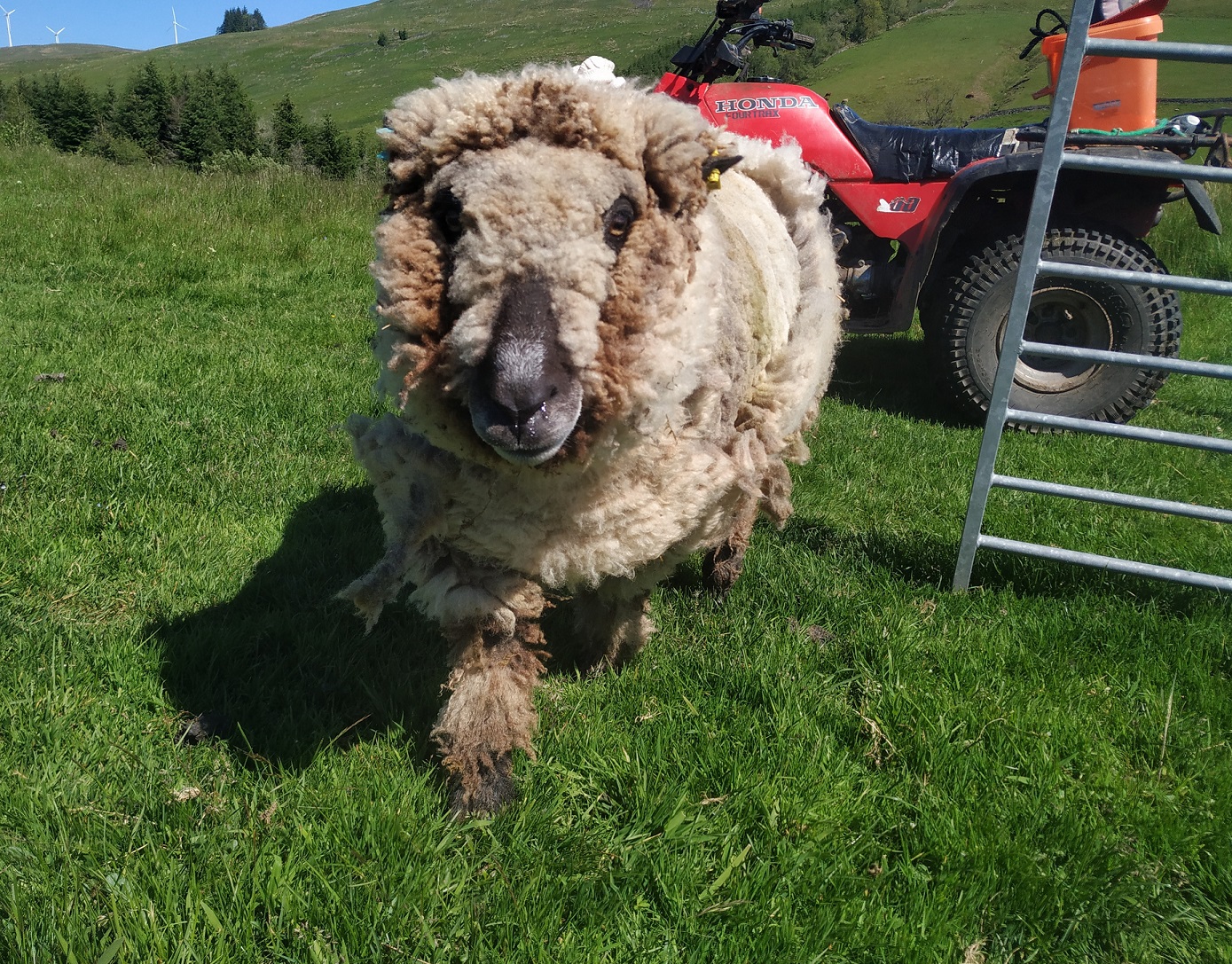 This year we decided to hand clip our flock.  We normally have them sheared by a pro and in recent years we’ve had a lovely chap round called Guy who specialises in small flocks.  He does a great job and we’re really pleased to be on his books.

It was our sheep Vera who got us thinking about hand clipping this year.  Vera has a sun allergy and each year just after shearing poor Vera gets the itchies.  She comes up in red spots and we need to give her cream and steroids to help her cope.  This goes on all summer from June until October when the weather cools down and her wool starts growing again.  Although her sun allergy came about originally as a result of eating a toxic plant a few years back, we think losing her fleece at shearing time is definitely a trigger for “the itches”.   We also think her skin might be a little irritated by the shearing blades.

So we thought we’d hand clip Vera this year and not give her a “number 1” hair cut, we’d give her a neat trim instead using hand shears.  We thought leaving a little covering of wool on her might help her skin.

Happy with this plan we then had a radical thought, why stop at Vera, let’s hand clip them all!

The result being that off I went this morning to shear my first sheep, Yaar!  (aka Mr Roly Poly).

Originally myself and Adrian were going to share the task of shearing, but we received Elliot our new dog last week.  We’ve not trained him (or the sheep) to be in each other’s company yet so Adrian is on dog duty while I’m going to be shearing solo.

So, off I went on the quad bike with four hurdles rattling around on the back tied on with bailer twine.  I also had with me my trusty pink rucksack containing my newly purchased shears, halter, water bottle, wound spray, plasters and some sheep nuts .

Slightly nervous, this being my first time hand clipping, I found the sheep in one of the top fields and set up a pen where they were, in situ.  They gathered round curious as I laid everything out, including my instructions on a piece of paper which promptly blew away.

I brought Yaar into the pen and got to work.

As you can see from the photos, I decided to clip the sheep with them standing up as opposed to the more usual way which is where you have them in a sitting position between your legs and move “as one” with the sheep.  Our flock are a relaxed bunch and are happy chewing cud and breathing in our ears while we do whatever needs doing to them.  That said, this morning I did pop a halter on Yaar in case he decided to wander off at a critical moment.

I started at the nape of the neck and clipped away.  An hour or so in I was quite pleased with my progress, I’d taken off most of the wool from his “barrel” and miraculously I’d managed to do it so it came off in one piece, a bit like peeling an orange.  As I use their fleeces to make things with I didn’t want it all in bits floating around the hills!

After two hours of work I could tell Yaar was getting bored and I needed a cup of tea and something to eat so I let him out and went back to the house for some refreshment.

Half an hour later, re-energised, I went back and worked some more until lunch time.  By now I’d done all of him except one of his back legs and his tummy.

After lunch I went back and finished him off.  The trickiest part was definitely his tummy, Ryelands have a lot of wool on their tummies, more than most sheep and I had to watch that I didn’t accidentally castrate him.  Poor Yaar, he let me crawl underneath him like a mechanic, he was so patient with me!

By mid afternoon I’d finished, I calculated I’d worked on him for about three hours not including all the breaks.  I’m hoping the more I shear the faster I’ll get and hopefully I’ll have them all done and sporting new haircuts by the end of June!