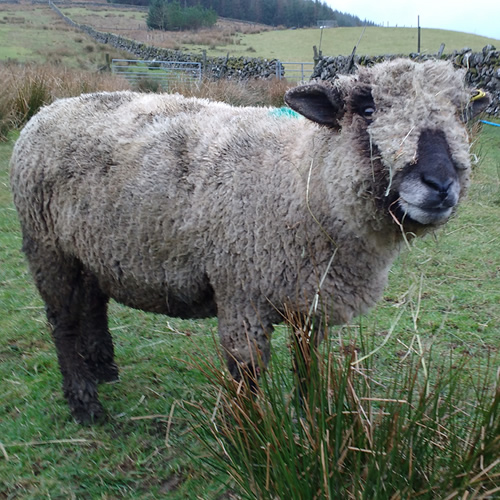 If you are squeamish or having dinner, this story may not be for you😳

As some of you may already know from following our stories, one of our woolly girls, Vera, has been plagued by “the itchies” all summer.

She has developed photosensitisation due to (most likely) eating a plant containing an alkaloid which then causes, in some cases, an allergic reaction to the sun.

Her condition slowly develops with the advance of summer, and then dwindles with the onset of autumn.  During the height of summer, Vera can often be found on her own seeking shelter in the pig ark or the lambing shed, somewhere away from the sun’s rays.  Exposure to the sun causes her un-woolled parts to become red and itchy and gets worse after shearing.

A complication arising from this is haematomas of the ear caused by shaking of the head as a result of the itching and general irritation.   Blood vessels then burst which in turn causes swelling and more discomfort.

It’s a vicious cycle and poor Vera has been in and out of the inspection pen almost daily while we applied udder cream to her sore skin, (we used to use sudocreme but have since discovered udder cream to be much better).  We’ve also been giving her steroid injections on and off through the summer to help with the swelling,  and we’ve also been checking her daily for the shepherd’s nemesis; blowfly activity, aka maggots, (the blowfly have been quite a problem this summer).  Lately we’ve added another job to our Vera care, we’ve been cleaning her ear with cotton wool dipped in hibiscrub as her left ear has been leaking puss recently, probably due to the haemotoma becoming infected.

If you’re eating whilst reading this, you may want to finish first 😉

Two weeks ago, Vera’s ear started to look quite bad, it was already swollen from the haematoma, but the addition of the puss and blood made it look even worse.  The appearance of puss and blood sounds worse than it actually is.  If “stuff” was coming out of the ear that meant that it was draining and the infection would eventually clear by itself, it’s the body’s way of getting rid of things.  But we needed to watch her carefully and make sure infection didn’t take hold.  Sheep are very stoical and will be brave for a long time before giving up over-night.  So we upped our checks and also phoned the vet to check if we should be doing anything other than the daily hibiscrub clean up.  We were advised to give her a long acting antibiotic and to keep keeping an eye on her.

We duly did this, we gave her her first jab of Betamox yesterday and wiped her ear clean whilst being thankful there are hardly any flies around now what with it being September.

Today we had hoped to see some small improvement, but poor Vera seemed to be shaking her head more, and her ear was still enormous, almost fit to burst.

We had a cup of tea and decided to call the vet out to have a look, just to be sure.  We didn’t think the infection was draining fast enough, it looked as though things were backing up, and although the antibiotic would be a safety net for Vera, it wouldn’t stop the immediate discomfort caused by the pulsating swelling.

The vet came out this very afternoon, it was Linda.  Linda, like the rest of the team at the local vet surgery is gentle, caring and very knowledgeable.  She knows Vera well, and Vera also knows Linda though tends to give her a wide berth!

So before Linda arrived we penned Vera up.

Once Linda arrived we got to work, we knew what Linda would be doing would be quite invasive and we had to keep Vera as still as possible.

We backed Vera into a corner and Adrian made sure she didn’t swing her rump round and try a three point turn.  I supported her head, while Linda held her ear and got to work.

First she inspected it closely and confirmed our suspicions, there was an infection going along the whole length of the ear.  There were two main “pockets” of infection, one at the tip end, and one at the other bottom end.

There was already a small escape route at the bottom end where blood had been seeping out for the last week or so.  However Linda wasn’t sure if the two pockets were connected and wasn’t keen on lancing both sites as there are lots of blood vessels in the ear.

She decided to work at the top end where the blood vessels are more spaced out and there would be less risk of nicking one.

She inserted a needle into the first pocket and squeezed.

Turn away now if you’re squeamish.

Quite a lot of puss came out, but not enough.

So Linda asked us to get some warm water and hibiscrub, she wanted to squirt water through to completely wash it out.

Now here’s the interesting part, it turned out both infection sites were connected, so when Linda injected warm water through at the top, out it came at the bottom!  This was excellent news, it meant that we could wash her ear out in one go, without having to repeat the operation.

As Linda sloshed warm water through using her syringe, all I could think about as I watched what was coming out the other end, was toothpaste.  It was truly fascinating, and weirdly exciting.  Vera for her part was relaxing into the process, chewing cud and giving the occasional sigh.  At times she looked up, stretching her neck with her eyes half closed, it must have been like having a very itchy spot scratched, deep below the surface, a spot which has been itchy for a long time, what a relief!

When there was no more toothpaste coming out and only clear water, we all came up for air.  We were a bit spattered but very happy.  Vera’s ear looked much better, it was still a bit swollen from the internal damage caused by the haematoma, but it had lost that red, angry look.  We gave Vera a wee treat of her favourite sheep nuts and led her out to join the others.

We thanked Linda and said goodbye, put the kettle on and had some tea and plum crumble, I almost declined the cream but decided I was too hungry to say no 😋