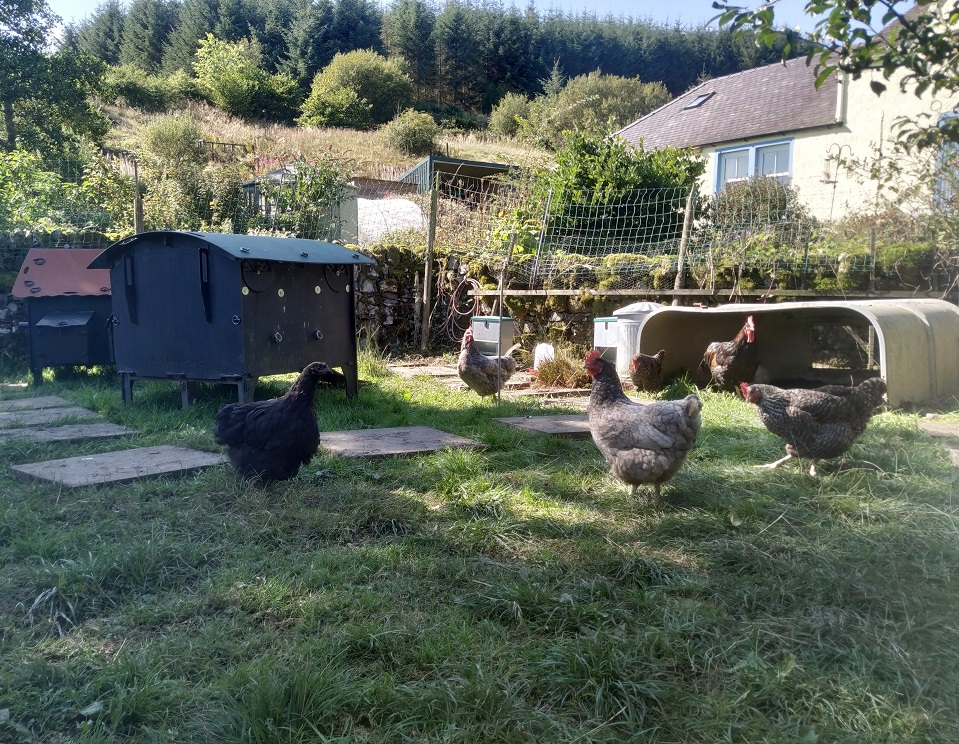 This week we have been very busy moving the hen coops to a new part of the orchard.  This has been prompted by several things, but mainly it is down to Clippy.

Clippy (the flock matriarch) has always been on the feral side.  She prefers to lay her eggs in a clump of grass rather than in the nest boxes, she prefers to sleep in the bushes than in the hen coops and she’s the one likely to be found on the wrong side of the fence, sometimes to her detriment.

We wouldn’t mind Clippy doing her own thing if it wasn’t for the fact that as flock leader, she naturally sets an example to the other hens.  As a result, the flock is becoming noticeably more feral.  Over time we have discovered not just Clippy sleeping rough, but often two or three accomplices in neighbouring trees.  It’s not only at bed time that the hens are doing their own thing, over the summer we had hardly any eggs, or so we thought, until yesterday when Adrian stumbled across a huge pile nestled in a clump of sedge grass.

Things came to a head recently when one warm summer’s evening, MMJ (mother of the chicks) decided to sleep in the tree tops alongside her pals Clippy, Salt and Pepper.  MMJ  didn’t seem to realise that her chicks were too little to follow her, and perched high up upon her branch, merrily called them to follow her into the trees.  Fortunately we were in the garden frying sausages on the barbeque and heard the commotion.  With a little strategic shaking of branches we encouraged MMJ to abandon her camping expedition and go to bed in the coop with her little ones safely tucked under her wings.

Unfortunately MMJ going wild camping with her feathered pals didn’t prove to be a one off.  This has meant that every evening for the past couple of months, we have been on “hen watch” at dusk.  This has meant creeping around the orchard to see what MMJ gets up to.

We’ve tried blocking the bushes and launch pads but to no avail.  Clippy gets past all barriers and is often accompanied by one or two others.

There’s another reason we don’t want the hens sleeping wild, it’s disruptive to our evenings and many a dinner has been reduced to burnt morsels while we pad around the orchard looking for hens and it’s a huge worry that the chicks lives could be in danger.  But on the other side of the bushes is our farm track leading to neighbouring houses.  If the hens decide to fly down from the trees on the other side, they could end up on the wrong side of the fence unable to get back in.  More than once we’ve found hens wandering around in the morning looking to get back into the orchard for their breakfast.

Again, this wouldn’t be a problem in itself if it wasn’t for the fact that sometimes visitors to our neighbours have dogs and unfortunately seem to forget they’re in farming country and let the dogs wander around off lead.  As smallholders, loose dogs around livestock is a huge concern.

So, having had one too many evenings disrupted, the thought of hens getting into trouble or the whole flock ending up feral, we decided to take action.

We’ve moved the hen coops away from the trees, into a part of the orchard where we can keep an eye on them from the kitchen window.  We’ve blocked off the wooded area where the hen coops used to be.

Also, in preparation for winter and prowling badgers, we have ordered a large walk-in run from Omlet.  This company has predator proof runs with a “skirt” running around the bottom making it impossible for anything to burrow its way in.  The mesh is strong and nibble proof so will provide an added layer of protection for the flock at night.  It will make things easy for us to encourage the flock to roost in the safety of the hen coops at night.  Once the run is up, we’ll throw some corn in, shut the outer door and let the hens re-aquaint themselves with the coops.  We also plan to install an automatic door on the run that shuts at dusk and opens at dawn so the hens can wander off into the orchard as they please during the day, but at night they’ll be safely tucked up.  This arrives later today so we’ll be busy building that for the rest of the week.

Meanwhile, we’ve already moved the coops and have spent the last three evenings in a mild state of stress watching the hens sorting out who sleeps where while they go “in, out, in, out, in out” of the coops for what feels like hours .  The most painful part has been monitoring Clippy and the chicks.  She has sent them skidaddling from the coop with a sharp peck on several occasions and the first time this happened we had to intervene as the chicks ran all the way down to the lambing shed at the far end of the orchard and it was getting dark.  We put Clippy into a different coop that evening and the chicks came back with a little encouragement.  However we don’t want to be intervening like this every time, Ideally the hens should sort it out for themselves and Clippy needs to learn that the chicks are part of her flock.  It’s a tricky one knowing when to intervene and when not to.

The last two evenings haven’t gone too badly, still a lot of to-ing and fro-ing but Clippy has been more tolerant of the chicks which has been a big relief.